13th February 2017. Parish Council votes to register the parish as a Neighbourhood Area, enabling it to work towards producing a Neighbourhood Plan. Volunteers with appropriate skills/expertise sought to assist.

What is the role of a parish or town council in neighbourhood planning?

The relationship between any group and the formal functions of the town or parish council should be transparent to the wider public. A parish or town council may choose to establish an advisory committee or sub-committee under section 102(4) of the Local Government Act 1972 and appoint local people (who need not be parish councillors) to those bodies. Members of such committees or sub-committees would have voting rights under section 13(3), (4)(e) or (4)(h) of the Local Government and Housing Act 1989. The terms of reference for a steering group or other body should be published and the minutes of meetings made available to the public.

Silverstone Parish Council vote unanimously to support the production of a Neighbourhood Plan.

The Finance Committee is to consider and recommend to the Full Council for agreement how suitable financing for the Plan based on the budget provided will be accommodated.

Parish and Neighbourhood Planning was introduced by the Government in 2011. It offers, for the first time, communities such as ours a pivotal and legal role in controlling unwanted development and shaping the sustainable evolution of our village. Readers will be aware that the Parish Council has produced a "Parish Plan and Village Design Statement" which was adopted by South Northants Council in July. This is available as an attractive, highly readable and collectable brochure describing our village and its fascinating history; it is available for sale at Crofts store for a sum of only £3. This document now has the status of a "Supplementary Planning Document" within the suite of SNC Local Plan documents which inform all planning decisions in Silverstone. This means that it must be referred to in judging all applications for planning permission in the parish.

Due to Silverstone's attractive and "open" form, its special locational advantages, a beautiful hinterland and the success of local Circuit employment initiatives our village is uniquely susceptible to unrelenting pressure from land speculators. The primary instrument for protecting the village from such unwanted development is the statutory South Northants Local Plan and we rely on our District Council to keep this document up to date and to maintain a supply of sites in the whole district well in excess of five years in order to meet Government targets. However, in a national environment where our own Government admits to a "broken" housing market and sites even in the Green belt are now being mooted for development, no statutory Plan can offer an absolute guarantee that unwelcome development will never be allowed (for example by an independent government Planning Inspector). Furthermore, government policy on housing and planning law can change at very short notice.

In a very short period of time this volunteer Team put together the Neighbourhood Plan Exposition which was held at the SRA between 28th October and 5th November. This event was a huge success and many thanks to one and all for making it so visually attractive and function so well. The December Parish Plan exhibition held in December last year had an attendance of well over 200 and 45 written comments were posted. Whilst we did experience some quiet moments at the recent Neighbourhood Plan event there were times when our small support team was quite overwhelmed by the assembled throng. Total numbers were impossible to judge but, amazingly, we have over 150 written responses to our Questionnaire. 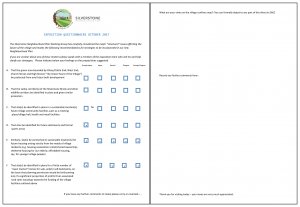 A particular favourite was "Silverstone the Movie" produced totally in-house by the team and with vital support from our drone and gyrocopter pilots. Fans can look forward to "Silverstone the Movie II" which is now under production with the promise of assistance from personnel at our local University Technical College.

It was most gratifying for Team members to hear of the pride which parishioners hold for their village and their commitment to its future. Particularly striking were the number of younger families who had made a special decision to locate here to enjoy Silverstone's special qualities and who fully recognize that it can and should evolve in a sensitive way in order to meet their families' future needs.

The next public participation event on the Neighbourhood Plan will be held in late winter/spring 2018 when the Team will address the much more difficult task of presenting various analyses and options for our joint sustainable future. We look forward to meeting as many of you as possible at that event. Over the winter we shall be gathering all the necessary data, surveys and information to help the village inform and guide this process in a systematic and objective way. Our meetings are held at 7.30 on the third Monday of each month and are open to all parishioners. If you have a particular skill set which we need, such as an ability to operate AutoCAD, please contact us. 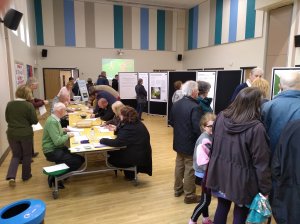 Get Adobe Flash Player to see this player.

The exhibition was a resounding success by any measure. Attendance (some 450 visitors) was unprecedented in the village for an event of this kind and we are most grateful to the head teacher, Mr James Bloomfield, for making the fine school hall available for our extensive material.

Visitors were able to view their village from a completely different perspective, both historical and topographical, and to consider the wide range of options available for the long term future of our village and its enhancement for current and future generations.

We would also like to thank all those who assisted in the production of the exhibition material and the exhibition aides who gave their time to engage with the public and guided them through a complex series of exhibits and issues, the result of some two years of research and analysis by the Neighbourhood Plan team.

It was gratifying to note that the event was conducted in a positive and pleasurable manner for team members and visitors alike and that the vast majority of people left the exhibition with a more up-beat attitude than they had anticipated. This augurs well for the future of our village and for the next steps in finalizing our plans.

We carefully monitored resident's attitudes to the array of information presented to them via a comprehensive questionnaire, which most people diligently completed for us. The key results of the "tick box" exercise (comprising 420 written responses) have been translated into a series of diagrams and charts, some of which may be seen below. 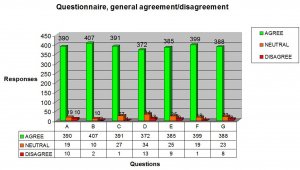 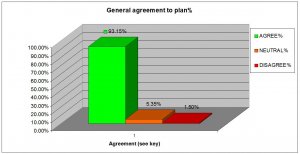 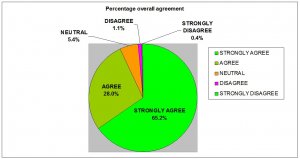 The results of the survey are overwhelmingly skewed in favour of our recommended long term Master Plan Vision for Silverstone. Moreover, the virtual unanimity expressed by villagers can now be harnessed to eliminate harmful, unplanned, speculative development from our parish and to move towards a final Neighbourhood Plan which conserves the best of our inherited heritage whilst taking a pro-active approach to enhancing all of our village facilities for the future.

We also asked for general comments which may not have been covered in the tick box exercise and many respondents also completed this section of the questionnaire. We promised to reply to all types of comment in detail and a full, detailed Q and A schedule will be prepared soon for posting online.

We now need to consider all the feedback from the exhibition and to produce the final draft of the Neighbourhood Plan. This will be in the form of a lengthy written (policy) document supported by an evidence base, created from our in-depth research. Further liaison will be needed over the coming months with our planning policy advisers, SNC officers and key stakeholders.

The next public event, which we shall widely publicise, will be a village referendum on the Neighbourhood Plan. We hope and expect that residents will turn out in force to this event and give their resounding, formal support to the plan.

The village defibrillator is outside the Post Office Sorting Office in Church Street.

In emergency ring 999, tell them where you are and you'll be told the cabinet access code. The machine will then tell you what to do. It is registered with the East Mids Ambulance Service.

Our directory contains details of all accommodation in and around Silverstone.